After a fantastic time trekking through Malaysia, Singapore, Thailand and Cambodia, we made our way to Vietnam, landing in Ho Chi Minh City (formerly Saigon).

Our hotel was great, within walking distance from the heart of the city and gave us so many coupons for Vietnamese coffee that we were always AMPED up. This is Carissa, a fabulous member of our group! This little plastic invention was also ingenious and I found it in Laos as well; it allows you to carry your drink and hang it in the car/bus without freezing your hand off. Can someone patent that now?

I will never complain about traffic ever again! This is the scene of a very typical morning in Ho Chi Minh City. I have never before seen so many motorcycles (called toyotas) before that all navigate right next to each other in the midst of massive cars and vans. One afternoon, a few of us decided to take a ride through the city in one and while on the road, the rain came pouring down! It was the most insane experience to be stuck in a tunnel with hundreds of other toyotas waiting for the rain to stop. I will never forget that afternoon, riding on a toyota as rain pours down and cruising around the city.

We had a fun walking tour around Ho Chi Minh city stopping at the French Quarter and the Catholic Cathedral of Notre Dame as well as seeing the building that the helicopter famously landed on to evacuate people from the city. We also stopped at the famous post office and sent post cards with a cool stamp on them. 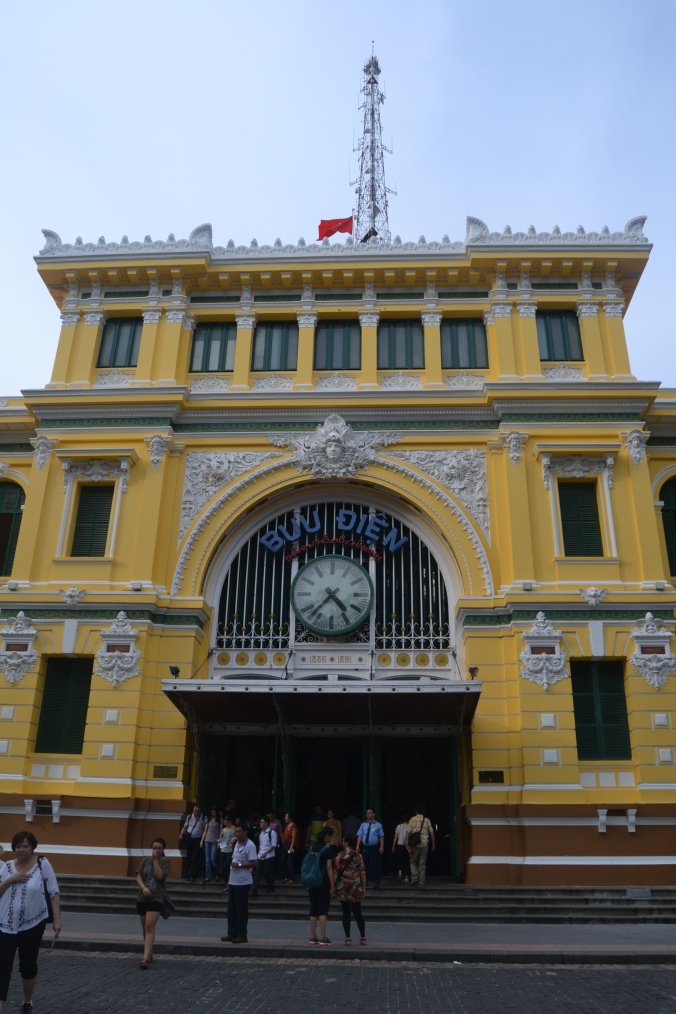 Outside of the post office, a vendor was creatively selling his product by balancing it all on his head. I found it incredibly amusing and ended up purchasing the sugary, fried delight. Now thats advertisement and sales! 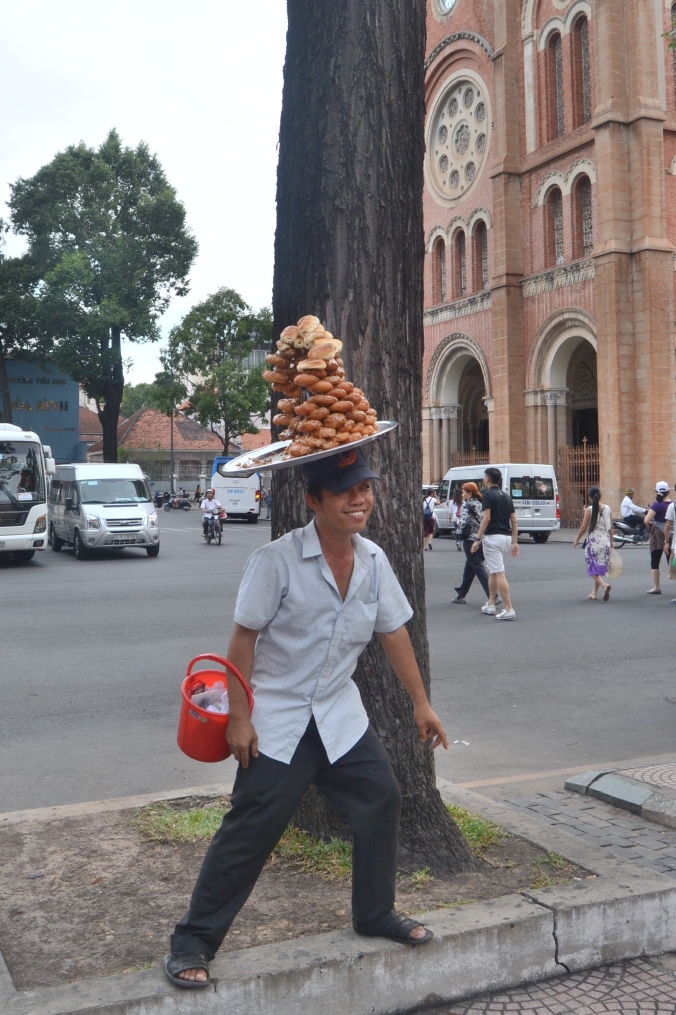 The next day we set off to visit the Cu Chi Tunnels that span 125-mile-long underground, where thousands of fighters and villagers hid and fought during the Vietnam War. It was a powerful experience to be there and we got to crawl through a section that had been reinforced. Let me say, that was a tight squeeze! 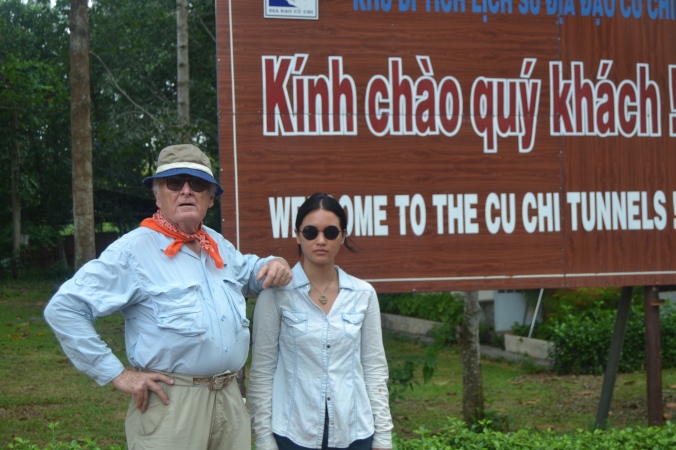 Our friendship doesn’t smile for photos.

The hot, humid and buggy jungle.

Eery model statues that depict one of the underground meeting rooms.

It was a tight squeeze, not for the claustrophobic.

On the way back from the tunnels, we stopped for some roadside Vietnamese coffee and rest in hammocks. That is a coffee restaurant that needs to come to America. Coffee and hammocks!

My mother and our friend Beau relaxing in hammocks while getting jazzed on coffee-sounds about right! 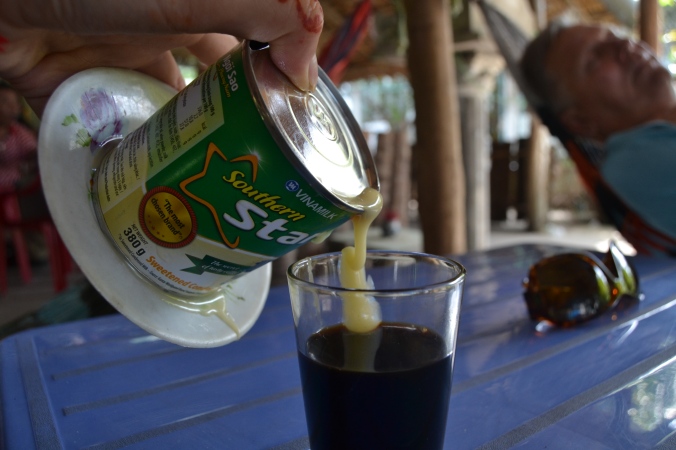 Its essentially a drip coffee with condensed milk in it. Delicious! Love the shot of Dana in the background sleeping. We also stopped at a fruit market before going on a boat ride on the Mekong. Southeast Asia does fruit right! It was so bountiful, beautiful, fresh and delicious. 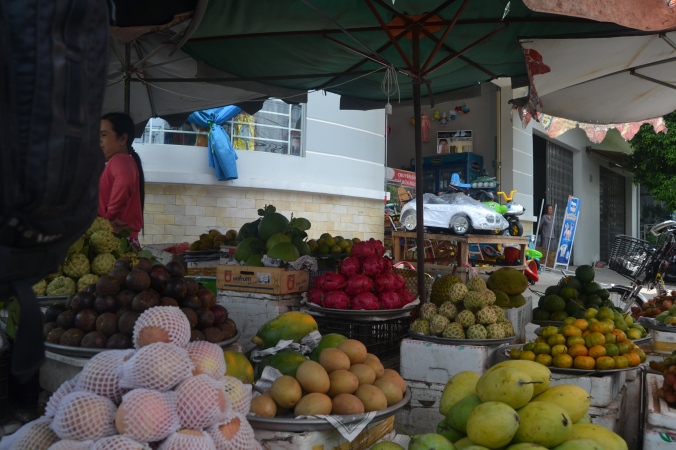 This woman was sorting limes into baskets, there must have been thousands of limes in all the baskets around her. 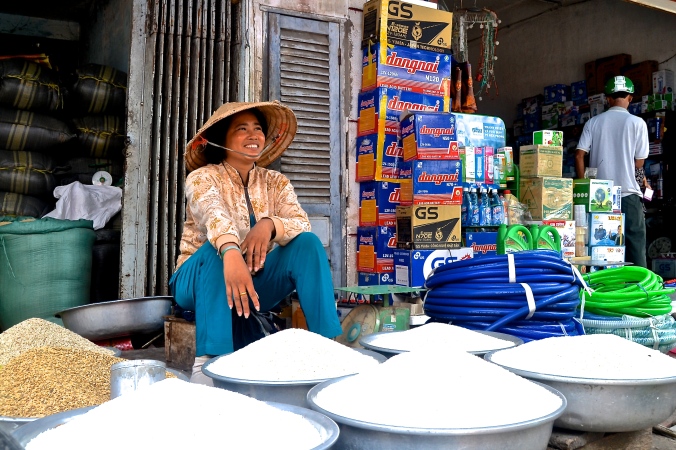 I always ask the subject if its okay if I take their photo, and he shy at first, but eventually enjoyed the mini-photoshoot!

We all boarded this boat to transit to get to our riverboat; all mixed in the motorcycles and animals. 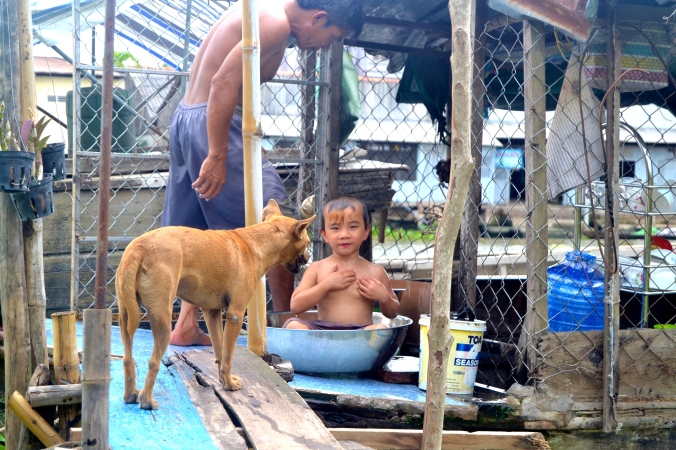 This boy was giving himself a bath in his families riverboat…for some reasons this moment and photo just really resonated with me at the time and still today. 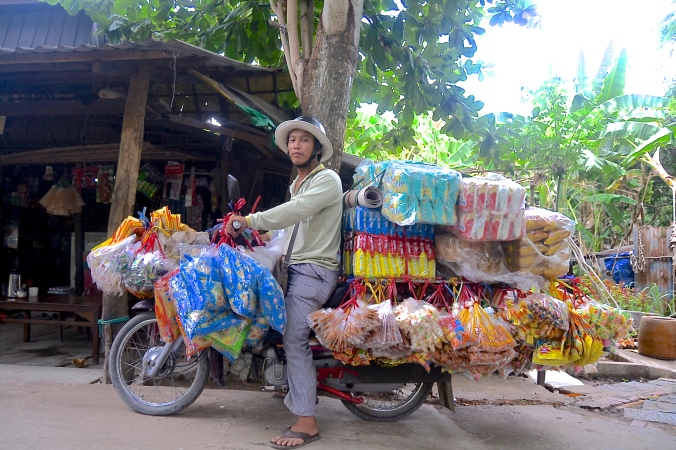 We stopped at this house where this woman was making sesame pancakes. I love the heart drawn on the wall behind her. At the same location there was what appeared to be a mini rice krispie factory and we got to help (or get in their way). 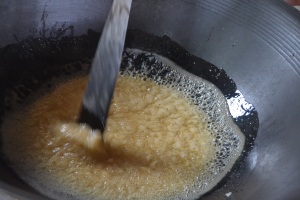 Popping the rice in another hot, large, wok.

Am I hired yet? 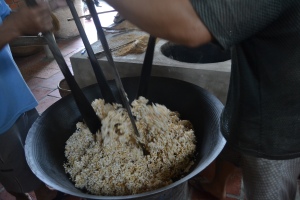 Dumping the popped rice into the sugar and mixing it all together. 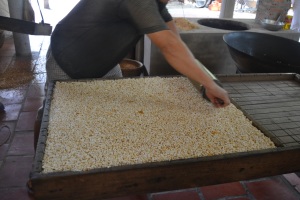 Pressing it to dry before cutting it. Let me tell you, those were some gosh darn good rice krispies! And the best part of the entire process was how collaborative it was. Two people did it at the same time at every step for maximum efficiency.

We then boarded our own river boat to cruise the Mekong! 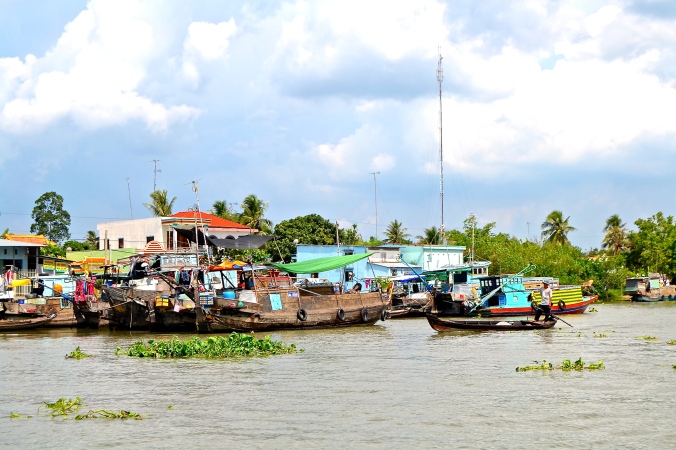 The Mekong is a life force and supports so many people, it was very special to take a ride on it again. 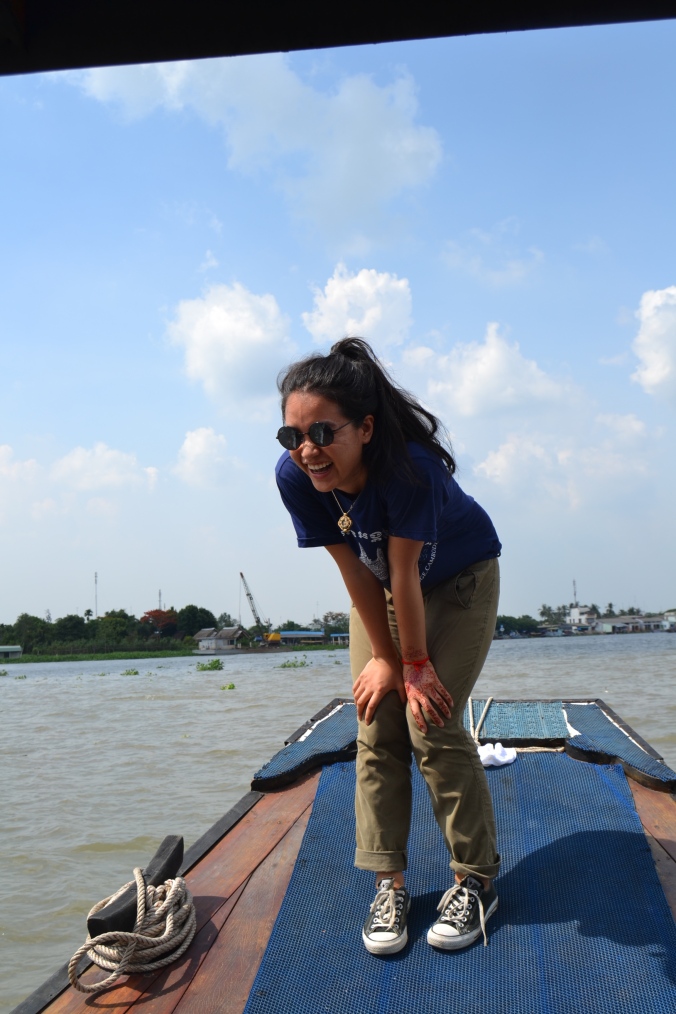 This photo cracks me up because I was standing on the ledge of the boat having a Titanic moment when Paul decided to sneak up behind me and pretend to throw me in the water before pulling me off the ledge. I have never screamed or laughed so hard all at once!

On the way back to the hotel we stopped to take photos of the rice fields. Later that day I explore the city with just me and my camera and had a fabulous time walking around to the town center and enjoying being free in the city. 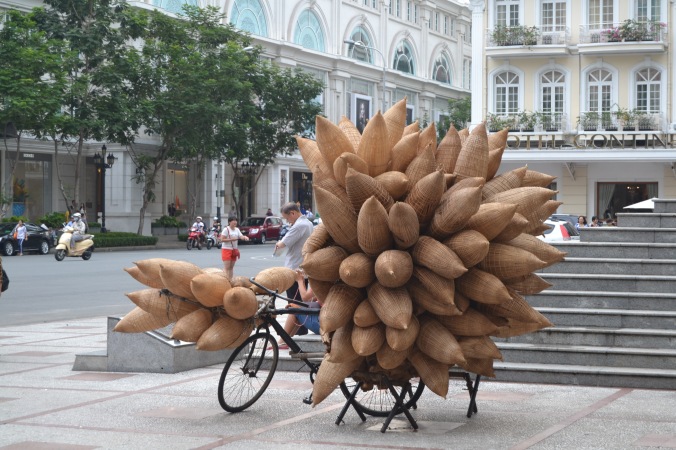 I am not sure what was going on in this photo, but I found it compelling. 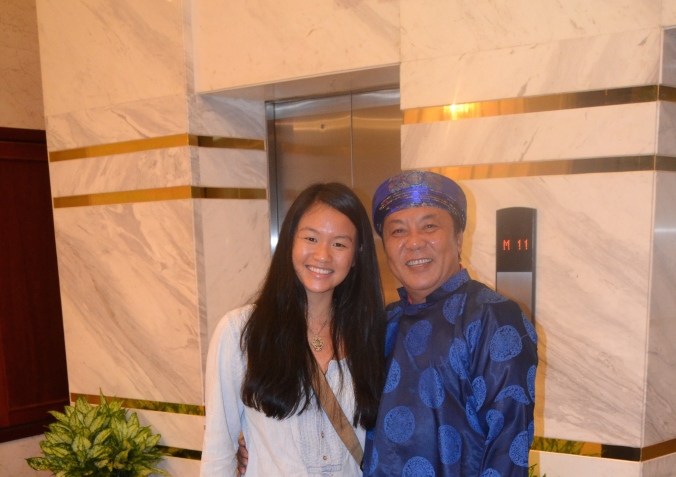 With our in country guide, Harry, for our farewell dinner where he dressed in traditional clothing. Harry made me laugh constantly and always had a smile on his face and joke in the back of his pocket. It was a great meal to commemorate the past three weeks of travel we had all done together as a group. Loved every minute! I still stay in touch with several members of the group and will never forget any of theme! The craziest and best people are often those you meet when you travel. While I do wish we could have stayed longer in Vietnam and gone to other parts of the country, it was time to go home and I always say its better to leave wanting more than wanting to leave.

Goodnight Vietnam and farewell to Southeast Asia…I can’t wait to come back for more food, adventures, good times with old and new friends and whatever the road decides to take me!