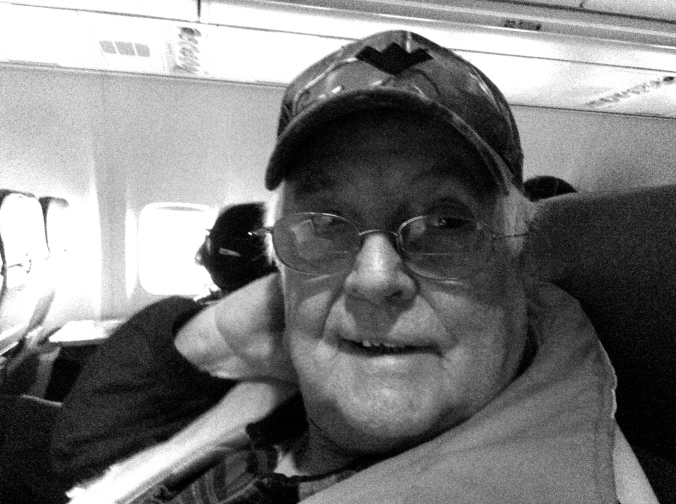 On an early Friday morning, I sat down next to Tom in row twenty-one on an average day 10,000 plus feet in the air. As I was heading out on a work trip over the winter break, I decided that there was no better place to make a friend than on an airplane. Yes, I am that annoying person on an airplane that you hope and pray that you don’t sit next to because you just want to get through the flight. Like most people, you didn’t come on an airplane to make friends. I may be worse than sitting next to a crying baby. I wasn’t even initially sitting next to Tom, but after my other seat mates stopped conversing to me and went back to knitting and playing bejeweled, I decided to mingle around the plane.

I plopped down next to Tom and swapped stories…

Kaila: What do you do in Alaska?

Tom: I am retired. Before I was a machinist and cut metal and made parts for an oil inspection company that is no longer in business, but I did that for twelve years.

Kaila: What did you enjoy about it?

Tom: It was a living (laughs). It just came natural to me.

Kaila: What do you do now that you are retired?

Kaila: What is an average day for you like?

Tom: Just being lazy. I do nothing. I visit friends and that is just about it.

Tom: Heavens yes. I love steak, baked potatoes, salad that is green for good measure and a big glass of iced tea.

Kaila: Are you married?

Tom: My second wife passed away back in 86’ and ever since it’s been a solo mission.

Kaila: What brought you to Denver?

Kaila: What is your favourite part about being a granddad?

Tom: Just playing with the kids when they are young.

Kaila: What scares you?

Tom: I can’t tell you anything. There really isn’t anything. Maybe when a plane is taking off and landing and you have bad winds, but other than that…(note: we are on a plane as he says this)

Where have you been?

Where have I been? You mean traveling? West Coast, California, Arizona, Colorado, Wyoming, Alaska, Illinois for a couple of weeks and through Canada for a little bit and where else have I gone…to Rocky Point, Mexico and I say that because Porta Ponasco is the Mexican word for that and that is about it.

Where are you now?

Where are you going?

Where am i going? Im going to Kanai, Alaska!