Happy Thanksgiving from Shanghai! Life lately has been a lot of fun, very busy writing midterm reports and of course funny because what is life without humor. A few days ago I was at a museum with a friend and sat down only to be bombarded by Australian high school students who after learning that I was American proceeded to interrogate me about the news. “What do you think of Donald Trump and gun control” was the first thing out of their mouth. Nice to meet you guys too! It was actually a very interesting conversation. They were on a six week trip, spending two weeks in China and then the other four in Israel as they went to a Jewish prep school in Australia.

Family Mart is everywhere in China and is comparable to a 7-11. This November they released a set of LEGOS to build your own store and who was I to say no to that! I got all five sets and completed my own little shop. We all need to be silly, have fun and LEGOS are a blast. I love puzzles and putting things together. 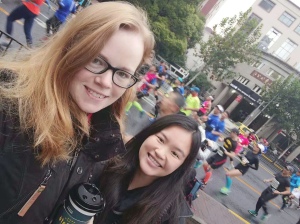 The Shanghai Marathon happened last weekend and went down the street right outside my apartment! The weather was pretty rainy and crappy so props to all the runners. My friend Nadine was in town and we watched from the sidelines with our Family Mart coffees and warm jackets.

I met the tour manager for the American band “Owl City” and got invited to the concert later that night. They had a really popular song when I was in middle school called “Fireflies” that was all the rage. They are very popular in Asia and touring all over. It was a great concert and they were actually amazing live! Very talented.

One of my 10 year old boy students has been bringing his Harry Potter wand to class and likes to point it at me and say “teacher ridiculouuuus.” I want to laugh and discipline him all at the same time. The next week he brought a hammer to class which I confiscated as well. KIDS.

And of course I’m included pictures of my students because they are the coolest. They are brilliant, naughty, a joy to teach and so much fun.

I have a lot to thankful for!

Thank you to all of you!

5 thoughts on “Happy Thanksgiving From Shanghai!”