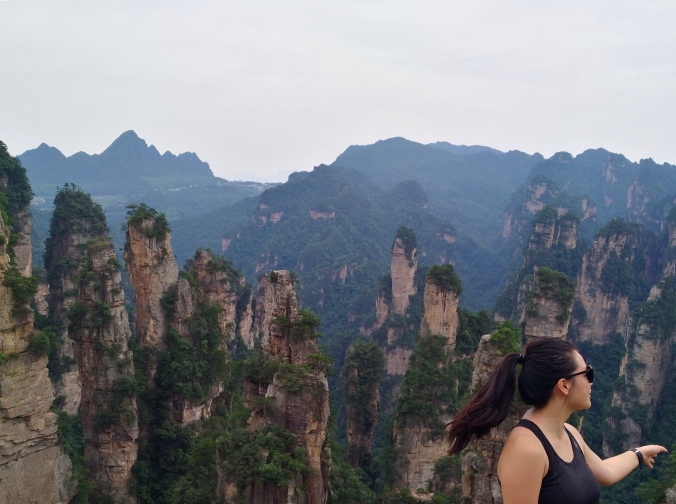 When I say 48 hours I really mean it! It was a blitz creek trip to one of the most amazing and beautiful places I have ever been. I had just completed my first week of my new job and was exhausted, but had planned this trip before I signed my new contract. I decided to go with a group as I wanted to take a break from planning and let someone else do it! There are pros and cons to group travel, but overall I am happy I decided to this time as the park is massive and I was able to make the most of my time with a guide. Not to mention the group I went with was a laugh and a half and we had a good time! 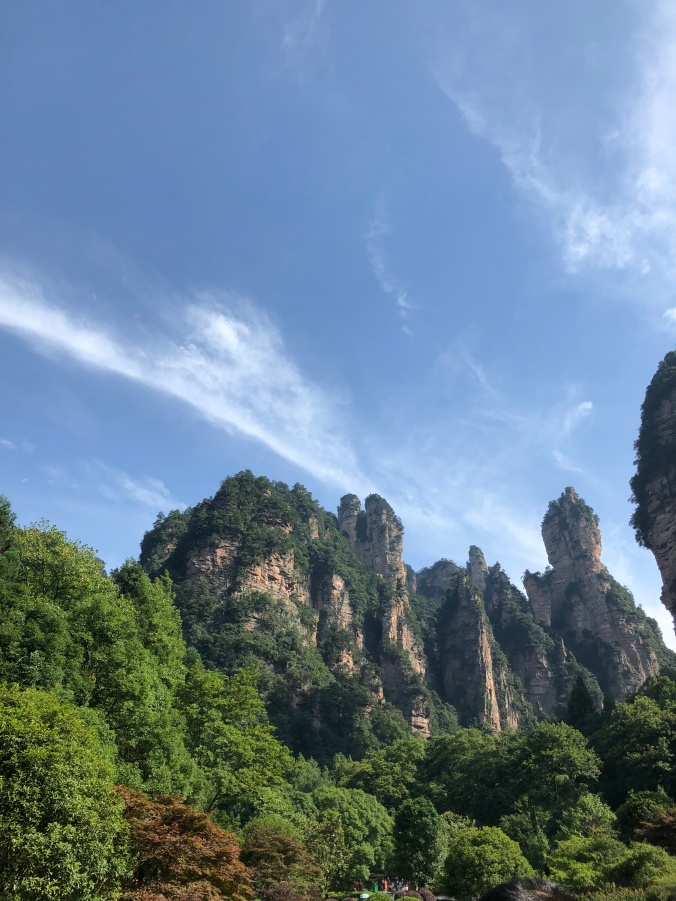 I went straight from work on Friday afternoon to the airport and landed in Zhangjiajie at 10:30pm. It’s about a 2 hour flight and I slept like a rock the entire time. We slept in the city close to the airport the first night before waking up early and heading to the park and UNESCO world heritage site early the next morning. 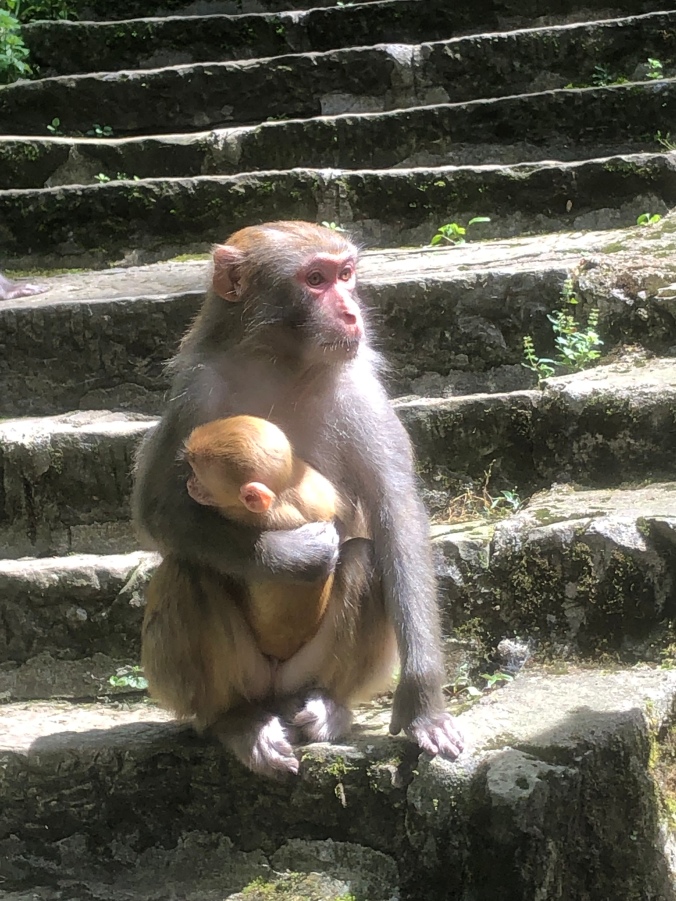 I would say that 95% of people don’t get Zhangjiajie and instead take the worlds tallest elevator up. I don’t blame them, it’s about 200 flights of stairs up according to my Fitbit. However, the hike allows you to avoid the massive crowds and get views in peace and quiet. And if you’re lucky, you get chased by a monkey looking to steal a banana in your backpack. The challenge was not really the hike alone, but because we were carrying our weekend packs and a lot of water to stay hydrated because it was hot and humid!

These mountains inspired the floating mountain scenery in the movie “Avatar.” Apparent director, James Cameron, refers to them as the “Hallelujah Mountains,” and I can see why! So absolutely breathtaking and the pictures still don’t do it justice. 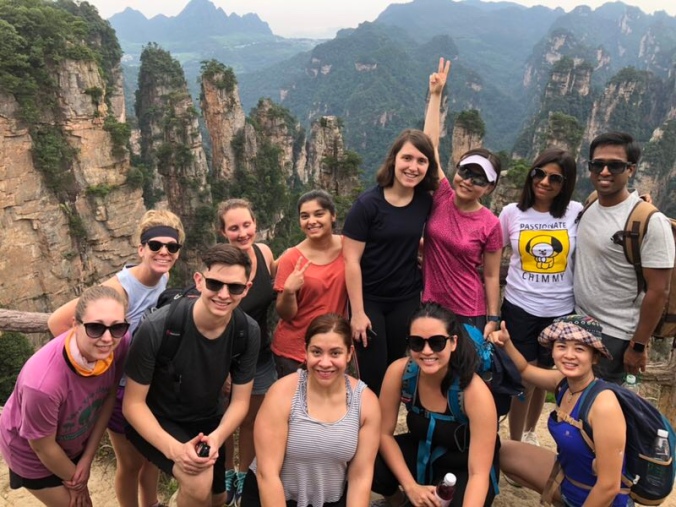 The group I was with! It was nice to have two guides and a driver and just not worry about those travel related details. I had some good laughs with these people. 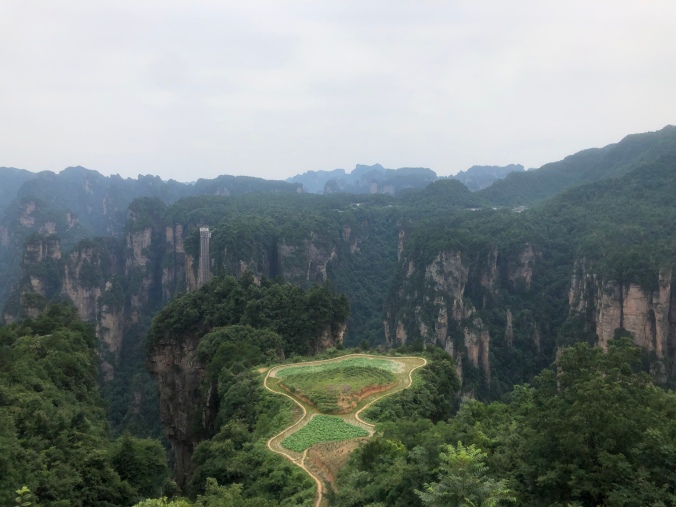 We visited a part of the park called the Sky Garden which was great because of the absolute lack of people. There are lots of buses to get you to different sections of the park because it’s huge! After taking a bus and a golf cart, we hiked down for a look at this garden and the best view of the park! 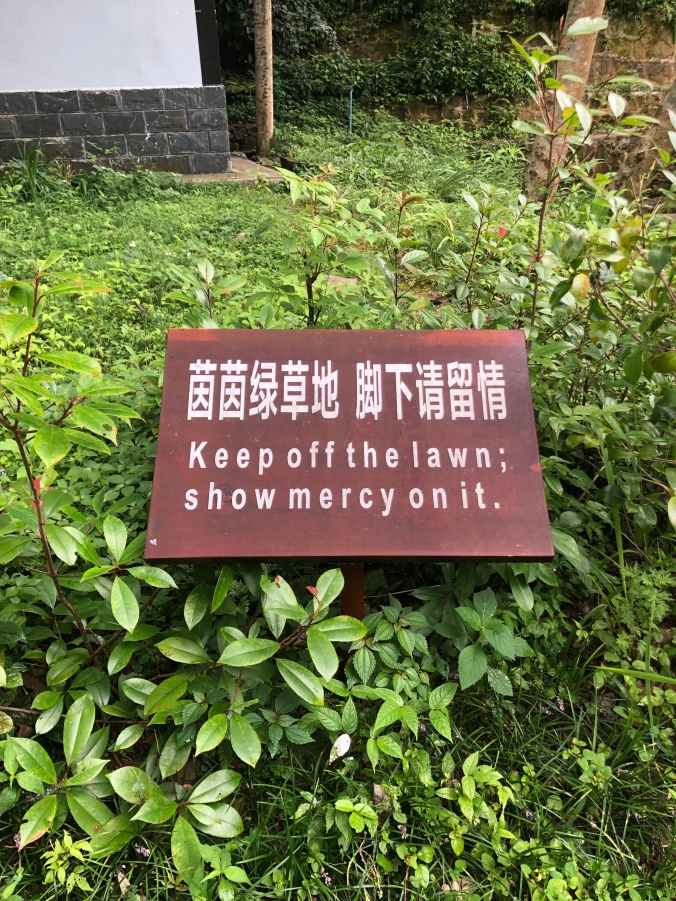 There were some great signs around the park we chuckled at. 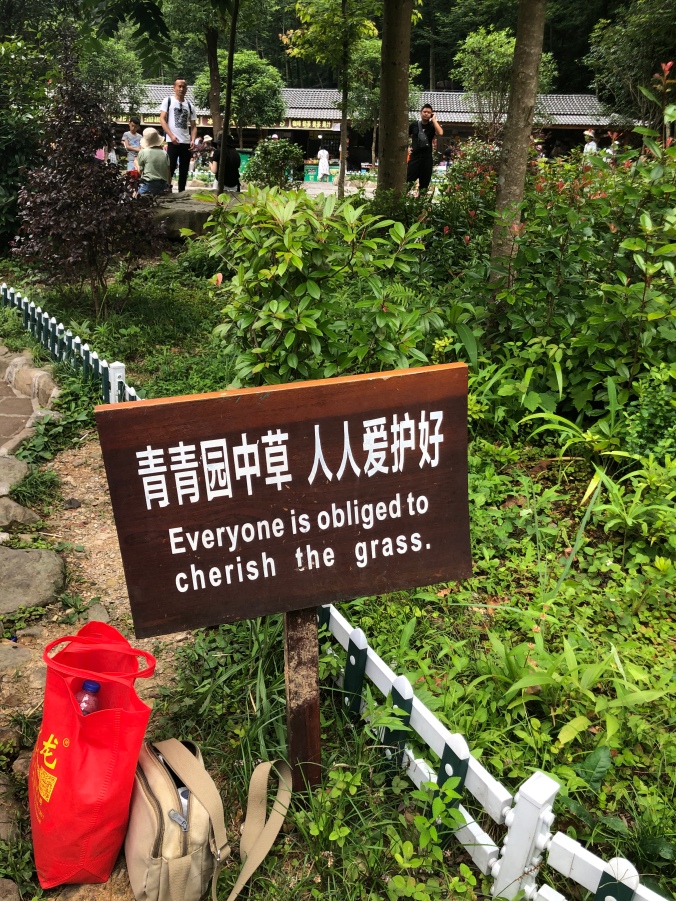 How do I cherish grass? 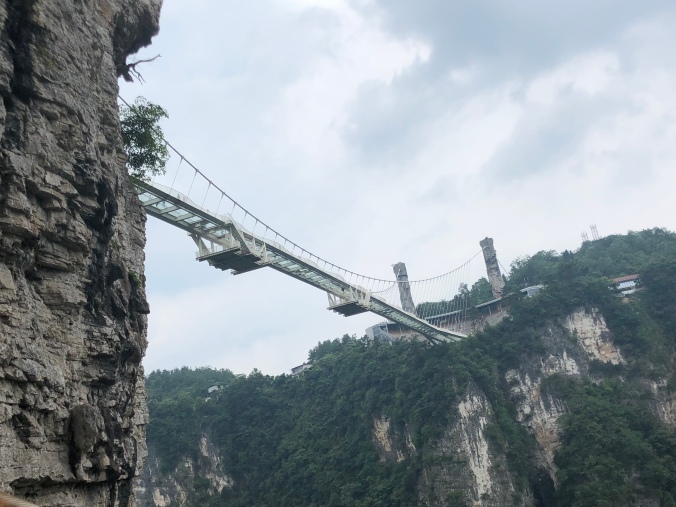 The next morning we hiked along the river, drove to lunch and then went to the sky bridge. It is a glass bridge suspended over a canyon! I’m not afraid of heights and had a fun time. 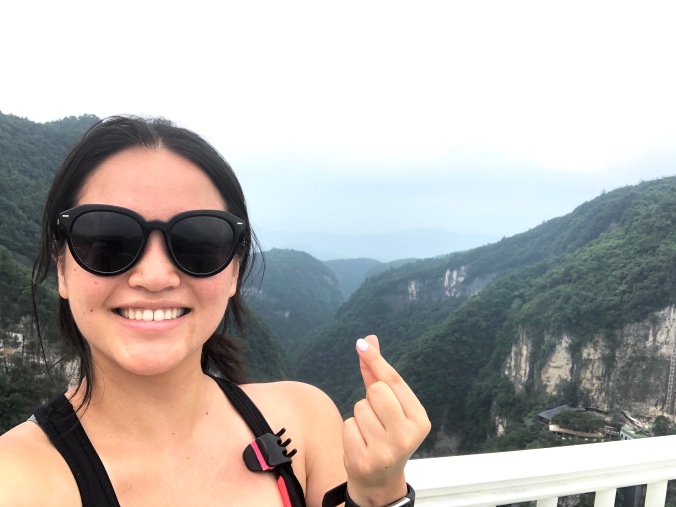 This is the symbol for “love.” Every Chinese kid knows how to throw up this sign and the peace sign. 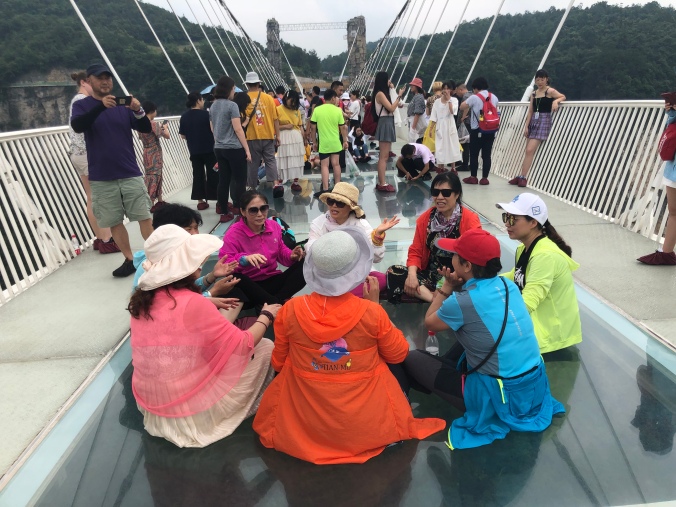 These cute ladies were sitting on the bridge and doing a choreographed dance. I joined in and there’s a video on my Instagram. Why not be silly and have fun with some fun strangers! At the other side of the sky bridge I got invited to compete on some TV show with water games but declined as I didn’t have time. When in China! 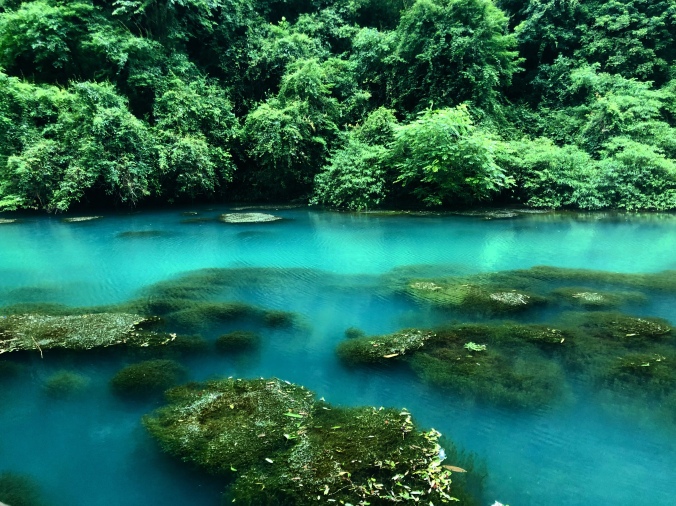 The hike down from the sky bridge was steep, but absolutely gorgeous! I mean look at that!! WOW! Half way through our hike through the canyon is started POURING rain.

We had a great group farewell dinner before heading to the airport for our late departures back to Shanghai. And by late, I mean LATE. I arrived back in the Hai’ at 2pm, slept for three hours and was back at work. 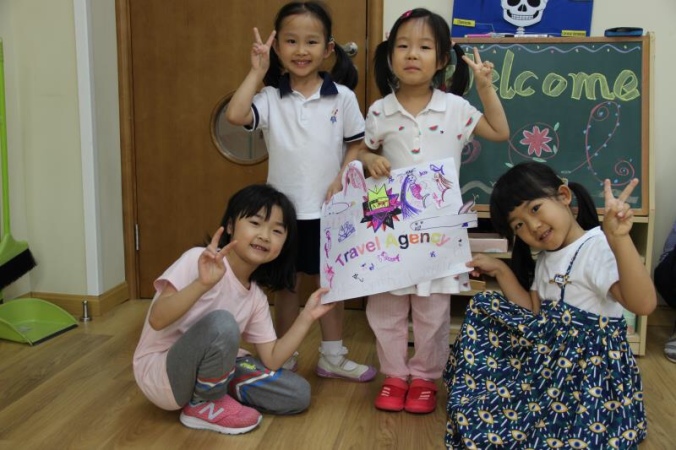 I’m learning a ton in my new job and having a blast. I helped pull a tooth out, get all the hugs everyday, am creating fun art projects teaching kids about currency and other countries for this session. 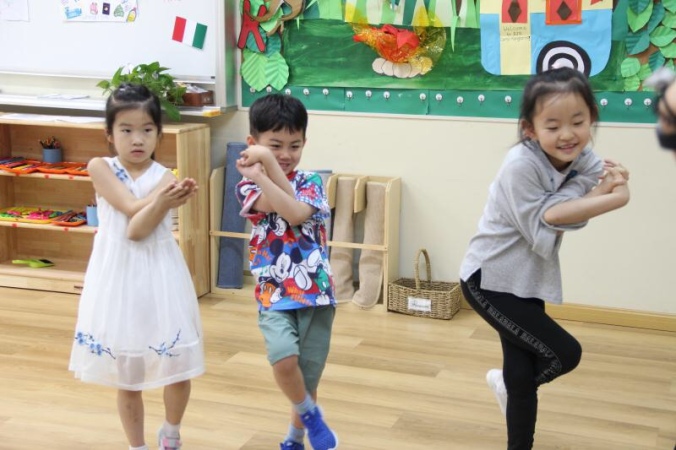 One of our countries was India so naturally we did some morning yoga.

I’m busier than I have ever been which is saying something! More importantly, I’m so happy. There is so much joy in my life and I’m having a great time in this season of life.

Signing off to order tea and catch up on some neglected organizing!

One thought on “Zhangjiajie: 48 Hours and The Avatar Mountains”