Lately in life I have been lost in the world (as opposed to school). I have been far too distracted and interested in the world (and less in my reading) and can’t seem to stop moving; its as though I have an endless adventurous twitch in my body that won’t let me sit still. I had an amazing weekend and went on countless adventures, mostly by myself which was kind of perfect. I think a lot of people have a huge fear of being by themselves, solo and alone. I think there’s no better way than to be my yourself; we all are stuck with ourselves our entire lives, so you might as well learn to enjoy it.

On Friday afternoon after school, I took off away from the beautiful Boulder bubble with a friend and we hit the road, thirty-eight miles to Estes Park. After turning on some good music and forgetting about school, we made it to the visitor center and grabbed a map. There was about zero planning involved about what we were doing which is sometimes the way it needs to be; a healthy dose of spontaneity and curiosity is vital to life. Surprisingly, there were still remnants of the fall leaves which made for a gorgeous ride!

Our first stop was at Sprague Lake which had a very somber feel due to the overcast weather and chill in the air. Still absolutely beautiful, serene and magical. I instantly felt more peaceful, less stressed out and living in the moment. There were a fair amount of people enjoying the serenity of the lake with us; kids fishing and friends walking around. It’s kind of how life should be, spent alone with friends in the outdoors.

We had a nice surprise as we headed to the parking lot. He was so majestic. 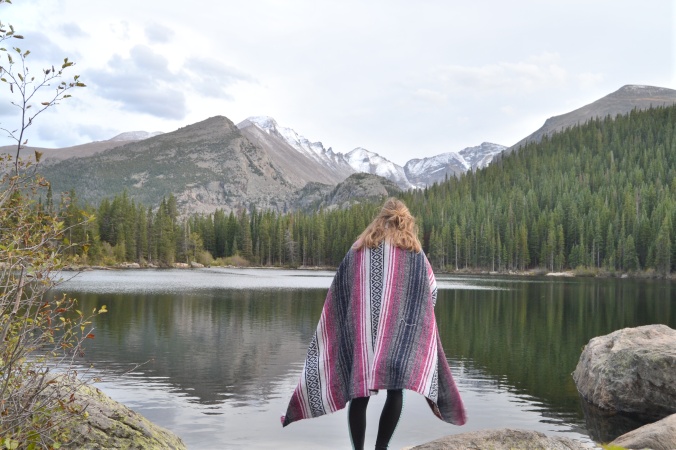 Next, we ended up at Bear Lake that was far more deserted and equally beautiful. I love how close Estes Park is, yet how far away it feels; its like stumbling on a new land. 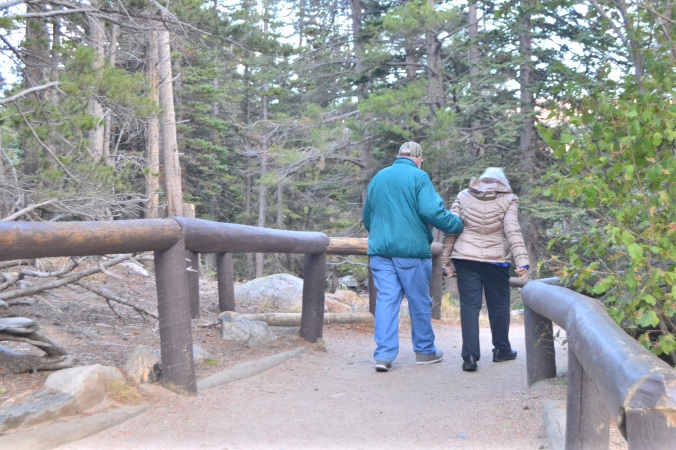 While sitting by the lake, we met this adorable couple, Chuck and Loretta, and had what I would call a “life chat.” People are wonderful, you just got to take the time to talk to them!

Last traces of fall…gorgeous. After wandering and walking around lakes, we packed up and drove into town where we found a great Thai restaurant and indulged ourselves in oodles of noodles while watching a spectacular sunset. Friday’s done right.

The next morning, I decided to wake up bright and early to do a sunrise hike at Chataqua up my favorite trail. I had invited numerous people, but they all declined which was totally cool as sometimes hiking alone is just what you need. I love the time before the sun rises with the city lights still a glow in the evening; perfection.

I practiced some yoga as the sun rose. I am officially on my way to becoming a certified yoga teacher and there is never a bad time to practice yoga. Yoga has been such a beautiful part of my life these last years and I decided a month a go that there was no better time than now to carpe diem and sign up for teacher training.

The next morning, I woke up bright and early (again) and went on a solo adventure to Breckenridge. There really wasn’t much thought process behind it other than the fact that I wanted to go on another adventure. So I did. I made my way to Mohawk Lake, frolicked in the stream, walked around and soaked in the crisp air while hiking around.

It’s kind of great when you find these pockets in nature where the beauty is abundant  and air is crisp and fresh.

I highly encourage everyone to frequently frolic in nature by themselves.

After Mohawk Lake, I randomly decided to continue driving up the pass and pulled over at the continental divide to hike the Hoosier Pass loop. I was blown away by how beautiful and pure it was up there. After a long morning full of adventure, I grabbed some cookies from Mary’s Mountain House Cookies in town and made my way back to school.

I am slowly getting lost in school and yoga once again. It’s not a bad life.

Check out the video of the weekend adventure here (lots of time lapses and other fun stuff):