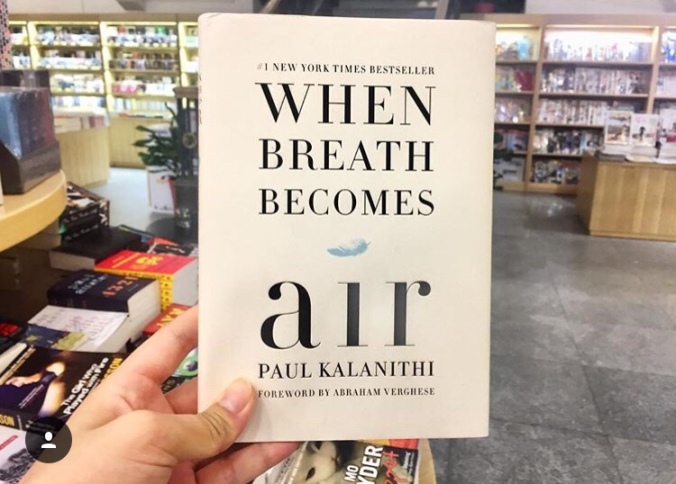 “Human knowledge is never contained in one person. It grows from the relationships we create between each other and the world, and still it is never complete.”

One of my goals post-college and moving to Shanghai is to read more books. I have always loved reading, but college took it’s toll on my personal reading given I had dozens of books and textbooks to read every semester (especially when I had an English class which was often). The first week I was in Shanghai, I found a great foreign book store near People’s Square and have frequented it numerous times since. Sometimes I just go and read a book in the store, however I have splurged on four books so far, one of which I have completely finished and ADORE. The latest book that I finished is “When Breath Becomes Air” by Paul Kalanith which is about Paul’s journey as neurosurgeon who is diagnosed with stage IV lung cancer. Paul wrote this book as he was dying and it is filled with such profound lessons about life, love and following your passions. I had not doubt in my mind that I would move to China and teach English. However, I would recently learn that this decision I made would come with unexpected heartbreaks.

“Flush in the face of mortality, man decisions become compressed, urgent and unreceding.”

What strikes me most about this book is not just Paul’s story and his battle with a disease that ultimately took his life, but the beauty of his writing. Before going to medical school, Paul got his Masters of Arts in English as well as Bachelor of Arts in Science in Human Biology. Paul is a very talented writer that is equal if not greater to his talent as a doctor, researcher and neurosurgeon. In the midst of his cancer diagnosis, he made the decision to have a child with his wife. I hope one day his child reads this book and realizes what an amazing person her father was and the impact he made saving lives in the operating room and the lives he touched with his last piece of his work, this book.

“There is a moment, a cusp, when the sum of gathered experience is worn down by the details of living. We are never so wise as when we live in this moment.”

It is a battle between the head and the heart; an exploration of science and the often questions that often can’t be answered and remain a mystery in life. This is a VERY fast read and I consumed riding on the metro, before my classes and would often re-read pages and start the chapter again after just finishing it. This book made the New York Times best seller list as #1 and I only hope that people continue to read it, be inspired and feel the compassion and empathy emulating from the pages of Paul’s writing. It is almost unfair if life is fair that a man with such talent that contributed to the world was taken and spurs the thoughts I have of what a life is worth. Are some lives worth more than others based on their contributions to human society? But doesn’t everyone have the potential to contribute it such ways but perhaps not the opportunities?

If you read this book, I would love to hear your thoughts on it! As I settle into my routine and pattern here, I have found some different book groups that I am hoping to become involved in Shanghai!