I took an incredible three day trip to see the Rainbow Mountains which are a geological phenomenon! I planned this trip Sunday night and left Tuesday morning. I’ve had this past week off post-summer camp and pre-school year. My passport is currently at the bureau to transfer my work visas which means I can only travel within China! If I had my passport I would’ve left the country, but I’m so glad I had this opportunity to visit another corner of China! I stayed in a yurt for two nights, gazed at stars and decompressed from the insanity of city life in Shanghai. Currently I am in Xi’an for the day before I head back to Shanghai.

The Rainbow Mountains are not necessarily convenient to get to from Shanghai. There is no direct flight from Shanghai. You can take trains from nearby cities but I decided to stop in Xi’an to see the warriors again (haven’t been since I was 10).

I woke up bright and early on Tuesday morning, took a cab to the airport and hopped on a flight to Xi’an. I then boarded my next flight to Zhangye. The flight to Xi’an is about 2 hours and the flight from Xi’an to Zhangye is another 2 hours. I arranged for a driver from my yurt village to pick me up at the airport for the hour drive. My yurt was right next to the mountains and only a 6 minute walk from the west entrance! 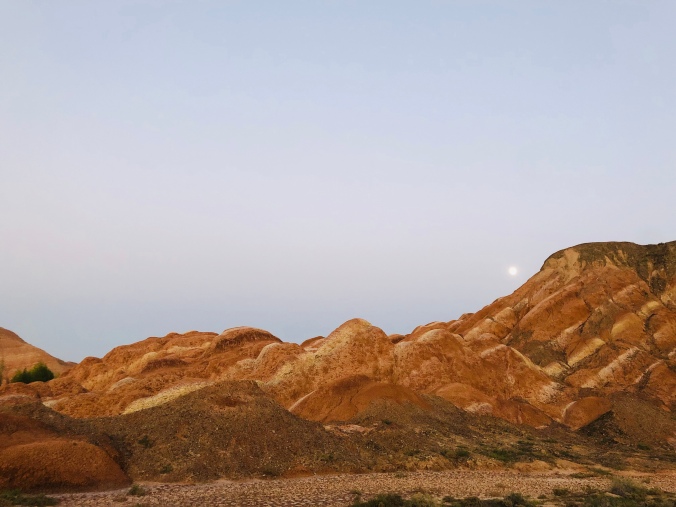 I mean this Is my view directly from my yurt! I did minimal research for this trip and totally made the right call staying at the Kaoshan yurt village.

The yurt was amazing, clean and I loved it. There were shared bathrooms that were lovely and the staff really goes above and beyond to make sure you are comfortable.

This was my view lying down!! This first night I had dinner at the restaurant in the big yurt. I ordered an amazing chicken and potato dish that could have served 3 people. I didn’t finish it…I hope they gave the leftovers to the cute golden retriever at the property! 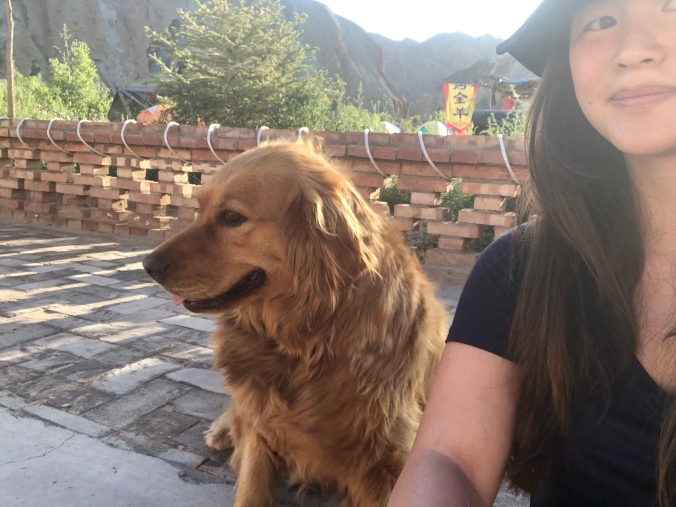 That’s a lot of hair to survive the heat of summer in Zhangye! 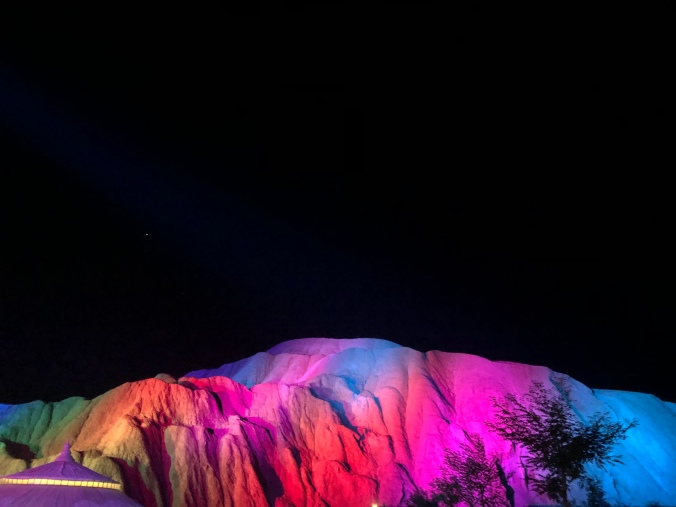 At night the mountains are lit up by rainbow lights. How fun!

Every night they have a bonfire and traditional dancing. I joined in and had a blast.

The next morning I woke up at 5:30 and walked to the park and caught this sunrise at one of the viewing platforms. The park is very well organized and has 4 main viewing platforms that you can get to by buses that run throughout the park. You do still have to walk up stairs to get to the platforms but it’s so convenient! 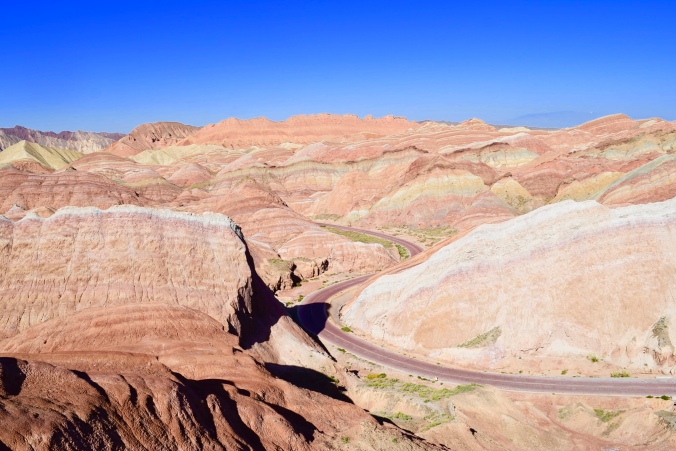 It felt like I was back in the states at the national parks! 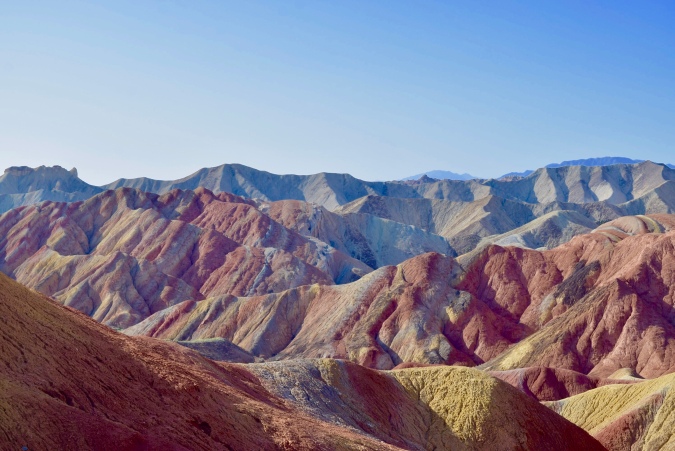 One of the coolest parts of these mountains is that they change color during the day based on the location and intensity of the sun. I know the colors are the brightest right after a rainstorm, but that’s a rare occurrence to time that. After spending several hours I went back to the hotel, had breakfast, and did some reading and relaxing. 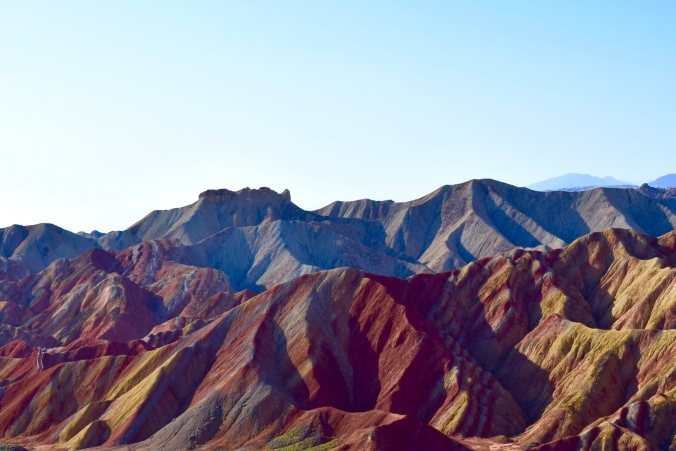 I went back around 5 to catch the lighting of the afternoon/evening. I just thought it was so beautiful and straight out of a storybook.

I got this hat the night before I left Shanghai and am super glad I did! It’s pretty dorky but the sun was so intense and I would’ve become a roast tomato without it 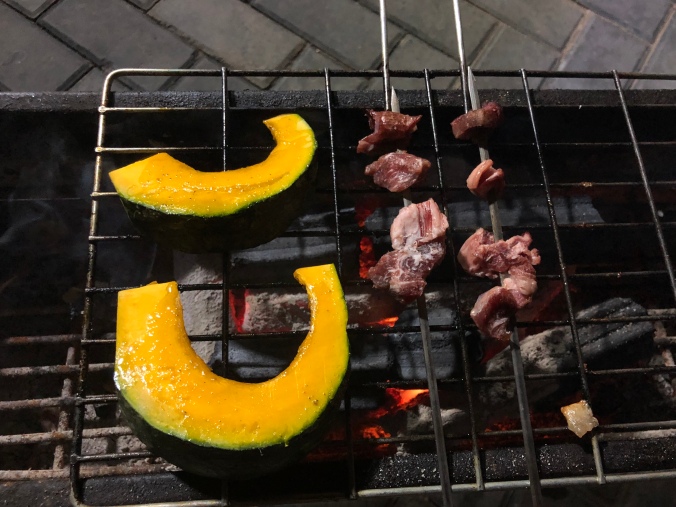 That night I participated in the bbq hosted by the hotel/yurt village. There was a buffet of raw meat/vegetables and you’re own little bbq to cook on. They had one romantic jazz song that was on repeat for a solid hour for ambiance.

It also came with this cute spice and oil tray! The next morning I decided to have a laid back day and just spent time on the hammocks reading and having a leisurely breakfast. The driver from the hotel was incredibly kind, but probably drove 1/2 the speed he could have at a rate of 25mph on a highway. I landed in Xi’an and checked into my apartment hotel where I was upgraded!

The next morning, I went to the City Wall before it become the scorching temperature of 97 degrees like later in the day. 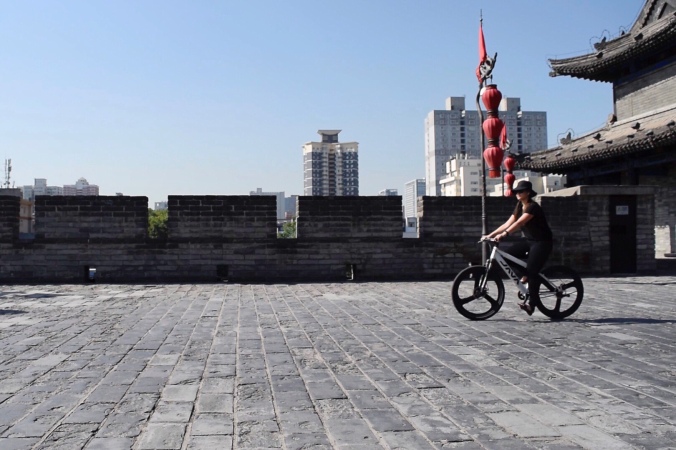 I rented a bike and used it for probably 40 minutes before I decided I was too hot. It was very cool to bike the ancient city wall! I took a bike to the metro station and then took the metro to the wall. After living in Shanghai, it seems like any cities public transportation is easy to navigate! I also have all the bike apps which you need a chinese number/bank account to use.

Insert picture of my dorky hat. A solid purchase! I made my way back to my hotel and called a DiDi to take me to the Terra Cotta Warriors. I could have taken a DiDi to the train station then a bus, but I decided to be nice to myself. And honestly, a DiDi is not expensive like car ride serves are back in the states. It’s also a privilege because unlike the price of a cab that could inflate it because you’re a tourist the DiDi rate is standard based on how far you go and such. Also DiDi has an English option which makes life so much easier So you don’t get ripped off!

The warriors certainly didn’t disappoint! I don’t remember much from when I visited at 10 years old. Despite the huge and hot crowds at this popular site, it still is magnificent to see. I want to be hurried with thousands of warriors too!

Clearly these photos don’t capture how many people were truly at the site. 98% Chinese tourists. I had ordered a ticket before hand to avoid the chance that the tickets would sell out since I believe there is a cap on how many can visit per day. Usually you’re safe if you don’t go on national holidays, but I wanted to be prepared!

Despite how much I did on this trip, I had so much needed downtime! I’m about to embark a massive week of preparation including an orientation for parents. This is arguably the most important year as my students are interviewing for their primary schools. It is comparable to the competition to getting into the colleges in the USA. There are consultants, interview training (I do this), practice test/tutoring, and connections involved.

It’s back to school time around the world!

2 thoughts on “The Rainbow Mountains of China in Zhangye, Gansu Province (and Xi’an)”