Life is a series of events that none of us are ever fully prepared to experience. But we do. And that is the beauty and tragedy in it all. None of us can plan for anything when we can’t predict the future. We can only live in the now and make conscious decisions that move us to a positive future. As I catch up on the last few weeks of posts, I thought I would start by sharing one of the greatest set of days; the kind of day that you can’t plan for and just say yes to because you know that it is fleeting, magical and rare.

Day one of magical times started with me taking a solo hike up to Chautauqua to embrace the end of dusk and beginning of dawn. I played around with my camera and got some really cool shots of the city before heading back down. At the top of the mountain in the solace and silence of the breeze, I practiced my yoga teacher voice, singing the sequence to the sky. (I’ll share more about yoga teacher training in another post…it deserves to shine).

Day one of the magical set of days continued with me receiving a package in the mail that had a scratch off map of the world rolled up in it. There was no indication of who it was from, just that it was from China. I had no clue who sent it and even went to my Facebook to announce my gratitude and ask the sender to step forward! Eventually, my dear friend in Malaysia gave himself away a few days later. I’m not an easily surprised person, and this was the greatest surprise I have had in recent memory.

The day continued with a morning brunch at the Dunshabe Tea House in Boulder where I met my mother, her college friend Roger who was in town visiting and my friend, Meggi. It was an amazing breakfast; all you need in life is good food and good company.

That I am certain of.

It was kind of a crazy contrast having my mom and her friend from college have breakfast with me and my best friend in college. Everyone says that the friends you make in college last you a lifetime and having two sets of friends at different points in their lives all sitting down and sharing a meal was so beautiful.

After brunch, my mom and Roger dropped us back off on campus and toured around Boulder. I took the bus straight down to Union Station in Denver to meet my other friend and her mom who was in town visiting from New York. I love taking the bus from Boulder to Union Station because of the convince, cost (free as a student) and fun experience of traveling. 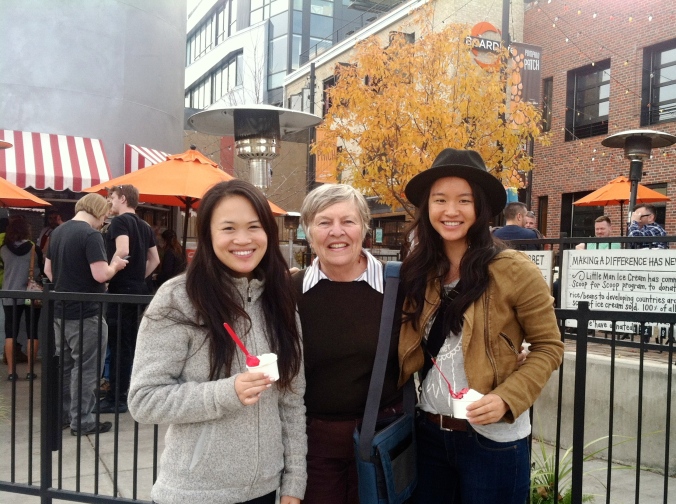 I met these two wonderful people at Union Station and took them to Little Man Ice Cream in the Highlands for life talks and walks.

I have known these two since forever! Cassidy and I are both adopted from China, grew up two blocks away from each other, each had a dog with the same name and share the same last name. We also went back to China on a homeland tour together when we were pre-teens. Also our moms are practically the same people. It’s safe to say that our lives have been intertwined since basically the beginning and I hope it stays that way forever. Cassidy recently graduated from CU Boulder where I currently am a Sophomore and is killing it making it in New York City.

After a quick catch up, I hopped back on the bus back to Boulder after a spontaneous invite from a friend to join them for dinner. I also love taking the bus because it means that I can get work done since I don’t have the nuisance of driving. I quickly changed into warmer clothes and my friend, Allen picked me up and we headed to Gold Hill for dinner with his family and friends in celebration of some birthdays. Allen and I met in yoga teacher training where we were deemed Ohmies from day one.

On the way up to Gold Hill, we stopped and took in the scene. It was kind of magical.And I know I use that word a lot to describe almost everything in my life, but its true. Life is magical. I choose to see it that way.

On the drive up, I reminisced about how the last time I had been up to the Gold Hill Inn for dinner was when I was in middle school after a long week of camp at Colorado Mountain Ranch. It turns out that Allen also attended that camp as a child. Coincidences everywhere. I even remember the horrible song they made us sing on the drive up every morning. I’ll spare you. 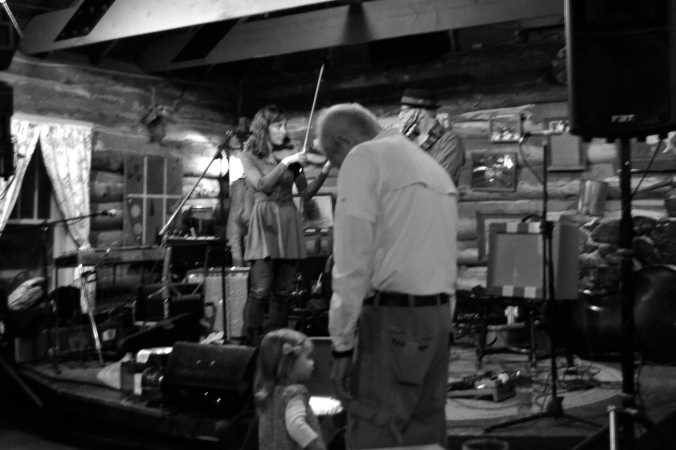 Gold Hill Inn is true establishment. From the moment you walk in you know you are welcome and home. I snapped this shot and love it so much because its what a presume to be a grandfather trying to dance with his granddaughter who just isn’t having it.

Food is one of the most powerful memories. This bread and butter is something I still remember from over eight years ago. It is legendary.

The whole dinner was a great evening of:

What life is all about.

The evening concluded with some ridiculously amazing live music that wrecked my soul. I went back home late and crawled into my bed completely satisfied with life. Sure, I had initially planned on spending the day writing essays. But going with the circuitous route and saying yes to the whims of life is what creates this magic that I often find myself in the midst of.

Dawn to Dusk. Life is magical and its up to each one of us to: